The Co-Host for the September’s Denver Happy Hour is Kimberley Zarlengo (Hair Guru/Stylist).  I met Kim through our friend Inga.  She's been my hair stylist and friend ever since.  Thanks Inga!  My friends at Highland Tap & Burger just opened their new brain child Sloans Lake Tap & Burger in the redevelopment just south of Sloans Lake.  The space looks fantastic and I can't wait to check it out this week with you!  Please join us this Wednesday! 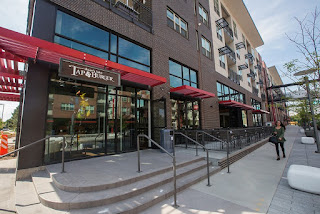 Kim is a native of Colorado. Born and raised in North Denver and currently resides in Denver. She has 4 children. She's been a hair stylist for over 20 years. She's a color specialist for Color Design Hair color. 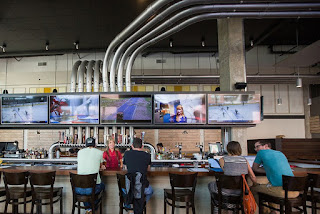 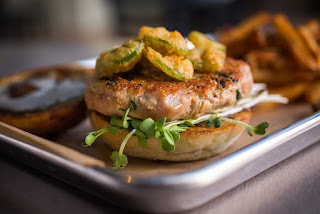 
As you turn onto Raleigh Street from Colfax Avenue to the south or 17th Avenue to the north, you wonder if your GPS didn't send you on a wild goose chase. After all, there couldn't possibly be a hip new restaurant smack in the middle of an older residential neighborhood with aging apartment buildings and street names like Conejos and Quitman — hardly buzzworthy blocks for Denver scene-seekers. But that's exactly where you'll find Sloan's Lake Tap & Burger. The restaurant, at 1565 Raleigh Street, is the latest venture from Juan Padro and Katie O'Shea Padro, who launched the original Highland Tap & Burger at 2219 West 32nd Avenue in 2010 and followed up last year with Bar Dough right next door.

The newest version of the Tap & Burger concept moves into a stretch of redevelopment that was previously the St. Anthony Hospital campus, but now sports several new apartment, retail and office buildings, with more condos and townhomes slated for the coming years. While the restaurant might feel a little isolated now, it's only a block off Colfax and within stroller-pushing distance of the West Highland and Sloan Lake neighborhoods, as well as the tiny enclave of Edgewater.
Some items on the menu will seem familiar, even if the new Tap is considerably brighter and more spacious than its older sibling. But along with the well-loved Shroom Luva's and Tap burgers (the latter heaped with pulled pork),  there are plenty of new additions to the roster, both in burger form and otherwise. The house burger, called the STB, runs a couple of bucks more than its menu-mates but features grass-fed beef from Western Daughters Butcher Shoppe and Tender Belly bacon. There's also a whole new "Colorado Barbecue" section featuring bison brisket, Colorado lamb, pulled pork and green-chile cheddar hot links, all smoked over wood that includes barrel staves from local distilleries and breweries.
Also new are pork hanger steak skewers, shrimp ceviche, Spanish chorizo corn dogs and Puerto Rican asopao, a soup made with shrimp, chicken and rice.
At the bar, expect a large variety of beers on tap and in bottles, here divided into sections named for Colorado's geography: Arikaree River (the lowest elevation in Colorado), Grasslands, Rolling Hills, High Plains, Foothills, Treeline and Summit — progressing in potency as the elevation increases. Ten house cocktails, a handful of wines — including Bar Dough's house red, rosso and white on tap — and a deep list of spirits round out the selection. While you're seated at the bar, marvel at the the tap tower, which splits off into eight shiny pipes that race across the ceiling and disappear into the kitchen wall. Juan Padro says the setup added about $100,000 to the budget but was necessary given the high ceilings and configuration of the restaurant.
Chef Eli Odell, who has been with the Padros since the beginning, heads the culinary program for both Taps, with chef Toby Prout, who joined the team at Bar Dough last year and was previously executive chef at Leña on Broadway, overseeing day-to-day operations. Padro explains that he is a believer in cross-training with his restaurants and bringing talent along through the ranks, and he also gives the leaders at his restaurants (general managers and executive chefs, for example) an ownership stake.
Sloan's Lake Tap & Burger is now serving dinner beginning at 3 p.m. daily, but Padro says the restaurant is still in a soft-opening period, so all menu items might not be available, and some minor shifts may occur before early next week, when the restaurant will formally open. Keep reading for more photos of Sloan Lake's newest eatery.
Posted by Lydia Lin at 10:17 AM